Beetroots have a relatively high sugar content (ca. 9g per 100g), though not as high as the closely related sugar beets. The energy content of 213 kJ per 100g is slightly higher than that of the carrot (150kJ) and considerably lower than that of the potato (342kJ)[3].

Beetroots contain the colorant betanin (after the beetroot’s genus name Beta). The colour is caused by the water soluble pigments betacyanins (which are a subclass of the betalains). Some people cannot process this pigment and get red urine after eating beetroots. This happens to 10-14% of the normal population. A connection between the prevalence of red urine and elevated iron intake (as with anaemia) after the ingestion foods containing oxalic acids of has been found. However, the inability to break down the colouring can also be genetic[5]. The red colouring is completely harmless. 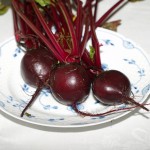 A type of beetroot which is not red but red and white striped on the inside. The rings are alternately red and white.
It is also called: striped beetroot, Italian Chicory.
This beet is good in a root vegetable mix made in a pan or in the oven and provides an attractive and delicate play of colour in the mixture.

It doesn’t stain the other root vegetables during cooking like a beetroot does, and it retains its decorative colouring, especially if a little balsamic vinegar is added while frying.

This is another type of beet which has a slightly reddish yellow outer shell but an intense yellow colour inside. Fantastically decorative – also when pickled.
This beet also retains its colour during preparation, either in the oven or in a pan.
Provides a splendid play of colour on the plate.

Hamburg Root Parsely is easily confused with the parsnip, but doesn’t taste as sweet, and curves out at the top, where the parsnip curves inward. Hamburg Root Parsley is often used to give flavour and substance to soups, often with other root vegetables and potatoes. It can also be baked, fried, deep fried – steamed, glazed and marinated.

Contains a large amount of folate, especially important for the production of protein for red cells, and a must for pregnant women, along with vitamins C and E.

Hamburg Root Parsley is a robust root vegetable. It is sowed in the early spring and is ready to be harvested in September. However, the plant can survive mild winters if it is slightly covered – and it even retains its green top long into the season. This lovely root vegetable can therefore be enjoyed all year round.

Parsnips are a wonderful root vegetable that can be steamed, glazed, baked, deep fried… anything that the cooking fashion prescribes. Parsnips and Hamburg Root Parsleys look alike but you can recognise the parsnip by the fact that it curves inward at the top.

The sweet and slightly spicy taste of the parsnip- slightly akin to celery – means that you can use it in many different ways. When raw it is a little sharp and coarse in flavour but steamed in broth or added to a stew it becomes very tasty. Mix it with potatoes to make a root vegetable mash, or bake sliced parsnips in the oven with a little and some spices as a side dish for meat dishes. It’s also a great way to add flavour to a soup.
This delicious root is stuffed full of energy and fibre and vitamins B, C and E, as well as folate, iron, zinc, and calcium.

Parsnips are a two year plant that spend their first year developing roots, which fill up with useful nutrients. During the second year the plant flowers and seeding- if it is allowed to do so, as we harvest and eat the delicious roots already in the first season.

The potato plant (Solanum tuberosum) is a two year – perennial plant with upright growth. The leaves are spread out and pinnately lobed with rounded sections and whole margins. The flowers are violet (or more seldom: white) and are terminal placed in small tassels. The fruits are large green or violet berries.

The potato plant grows large, starchy tubers on its subterranean stems. The whole plant is poisonous, to a certain extent also its tubers which have lain on the ground and become green. Plant variety, careful picking, correct storage and separation of infected tubers can limit the extent of illnesses.

In 2008 the potato was the third most cultivated plant, after rice and wheat. It has a yield that is 4 times higher than rice and wheat on the same area. Potatoes are considered more nutritional than rice, wheat and corn. For example, it contains much less fat than wheat and more protein than corn.

China is the worlds largest grower of potatoes.

The people of Belarus eat the most potatoes; 175 kilos per year per inhabitant.

Carrots (Daucus carota) is a very widespread vegetable crop in large parts of the world. Like many other plants in the Umbelliferae family the carrot is a two year plant (winter annual), meaning it only grows rosettes and roots in its first year, but doesn’t flower. The plant first grows a rosette and a thin taproot with fine lateral roots which spread out underground. However, after a few weeks of growth, the upper part of the taproot begins to get thicker, and during the rest of the year the taproot continues to grow and fills up with, among other things, sugars from the leaves’ photosynthesis.

If it allowed to, the plant will begin to grow again after the winter’s cold period, but in order to do so it will use the nutrients from the roots to create the steam, flowers and seeds. When the seeds become ripe, the plant will die.

Carrots are one of the most important vegetables in Denmark and is grown on approximately 1500 hectares every year. The crop has a great productivity- between 40 and 100 tonnes per hectare can be harvested. This equates to 4-10kg per square metre. Carrots are relatively hardy, they do no require much fertiliser in order to grow successfully and are therefore widely cultivated on organic farms.

Carrots are one of the most vitamin A rich vegetables. As Vitamin A is fat-soluble, carrots should be eaten with a little fat if you want to benefit from the vitamin content. The colouring is caused carotene.

Brogaard is the only place in Denmark where onion sets are grown, and we produce from about 40 hectares. Which gives approximately 1000 tonnes of onion sets.

Onion sets make it easy for garden owners to grow lots of onions and onion is a nice crop that is even easy to store for later use , which is very practical if you do not have time to eat them all during the summer.

Onion sets are small onions, which in Denmark are grown at the specialized farm holding on Lammefjord in such a dense population the year before that they can be harvested in an appropriate small size in July-August . It is these small bulbs one buys as onion sets to put in the garden, and each small onion sown grow on to a large onion. The largest part is, however, sold abroad , however , in most of Europe where you can be early in the process of selling onions, either as bunch of onions or finished eating onions .

Pages on this site